A finish & a flimsy

Finally managed to sit at my machine today. First thing to be done was finish this little stocking off from Gail Pan's Christmas BOM Merry & Bright. 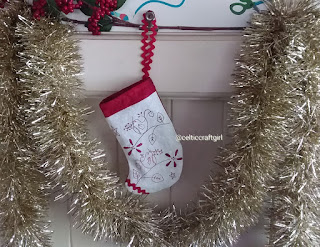 Back in 2017 i decided to join in with Sue Daley's Round We Go BOM. I chose to be a little different & made my EPP in Halloween fabrics. I got them out the other day ready to turn into a flimsy & discovered I'd only trimmed back about half the blocks. That took awhile to do today, then onto laying them out to see in what order I wanted to sew them in. 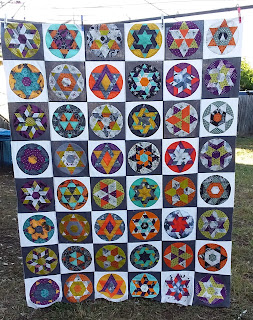 Yay another project moved from partially done to a flimsy.

Finally a finish. 😊😊. I can't remember when I stitched these little cupcakes but it was several years back. Last year I trimmed the cupcakes into the hexagon shape, found some backing fabric & back they went onto "finish one day pile".

Yesterday was the day. I cut the background out & i found a precut wadding hexagon when I'd been cleaning my cutting table earlier. I remembered that my SIL had given me some wadding hexagons she cut out using bamboo wadding but she didn't like it. I crossed fingers that I hadn't used them all since I'd found that loose one. I found just enough.

Last night & some of this afternoon was spent sewing the centre together. 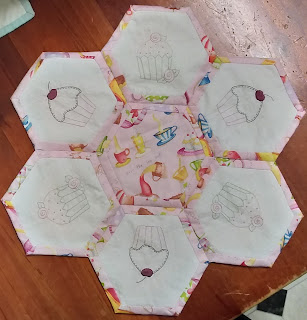 Pattern is by Michelle & is called cupcake table centre.

During the week I thought a lot about the blocks I trimmed last Friday & came to the conclusion that I didn't want more hangings. I need tablerunners more. Thursday i got them out to see how many i would need to use to fit my large table & found I'd miscounted & i had 24 blocks not 20. 12 blocks was too long so each runner would have 10 & i wiĺl find another use for the other 4. But what to do for the in between blocks ? I decided a 9 patch would work for me.

Friday morning i searched in my cupboard for a pack of fabrics I had stashed away. Not sure why i bought them but I think they originally were for the quilt as you go hexies.

I laid the blocks out on my bed to try & get an even mix of blocks as quite a lot of the blocks were sayings. I turned away for a moment & when I looked back I found this. 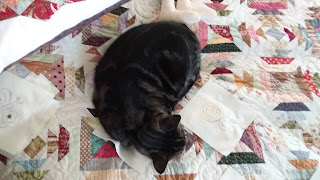 Guess she thought I hadn't pressed the blocks enough. 😊😊.

Several hours later all 9 patches made, some reverse sewing on one of the runners & voila, 2 runners made. 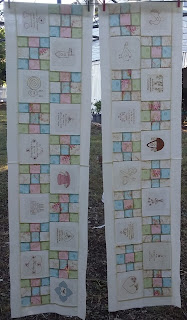 I'll bind one of them with pink & the other either blue or green. Thinking of the other 4 I might make a little table mat using the hexie quilt as you go method & fill the spaces in between the stitchery ones with plain fabric hexies. I had hoped there was enough 9 patches left over to make a small runner but there wasn't.

Moving onto another "old" ufo I pulled these out of a folder but after trimming a little I still don't know what I'll make with them as they are all different sizes. Bronwyn Hayes of Red Brolly included Brutus in a lot of her work & one year gave these ones out free but with no finished plan. Maybe I'll make a collection of Brutus cushions. 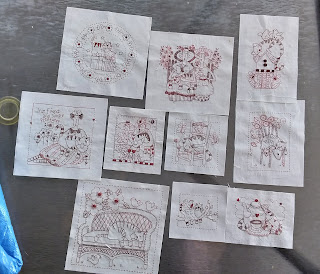 Come evening I finished the embroidery of the rr panel I was stitching last week. Now it can get into the mail & I just hope it doesn't take ages to get to the USA. 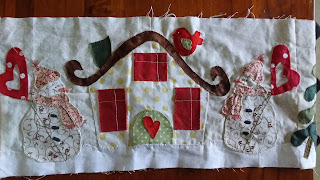 Last thing before bedtime I got back to one of the Love & Hugs from Australia blocks.  I stitched the orange pieces & then put a few stitches into the dragonfly just as Inferno finished. 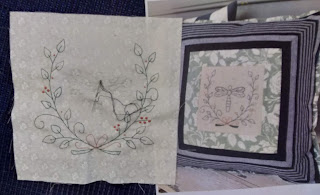 Pop over to Wendy's blog to see who joined in & what projects were worked on.

Yesterday I joined in FNwF #2 with our hostess Cheryll.

First up I needed to get my block started for a round robin I'm participating in. I had a slow start as my pattern only just arrived. Theme is seasons & we could choose 2 or all 4. They could be 16" blocks or rows. I was going to go with individual blocks of the seasons but when searching the web for ideas I came across a pattern that gave me a smile. I've chosen to to have all 4 seasons for my hanging. I decided to start with winter as we are coming into that season & this pattern for a little light heartedness in these trying times.

I spent time in the morning putting the block together as another "rule" was pieced background.

The afternoon/night was then spent stitching some of it down. I've not done buttonhole applique in ages so I think my vliesofix is a little old. Everything was attached nicely but when I went to start sewing I found quite a bit had started peeling free. 😔.

After that I got out these blocks I'd stitched many years ago & trimmed them up. I was looking at them last week trying to decide what to do with them. The original pattern was quilt as you go hexie bom to make a large quilt. I don't want to do the stitcheries as hexies. I didn't end up buying all the patterns so i only have 20 blocks. I think I'll go with a wall hanging. Either a 4 x 5 or a 4 by 4 & turn the other 4 into a small runner. 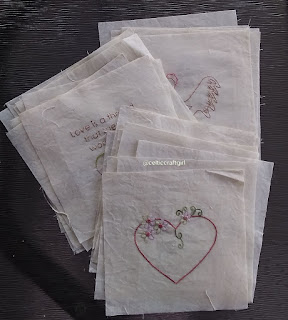 Also before I started on my RR piece I cut out background pieces for a block of the week of joined. It's run by Fig n Berry designs & comes out every Monday for 23 weeks. The choice is pdf or Lisa will send a paper copy with iron on transfer. I went with off & I've now traced to first 2. 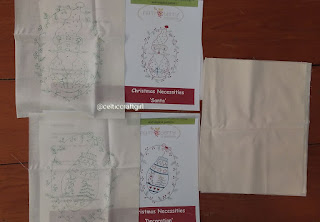 I haven't started them because I've been stitching the Love and Hugs blocks, reading of doing puzzle books. I traced another 2 of those yesterday as well. 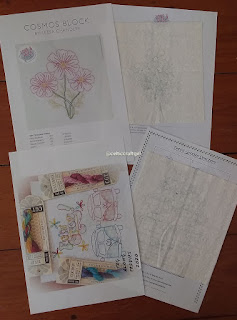 And if I get bored with all that I have these, which arrived yesterday, to entertain me. 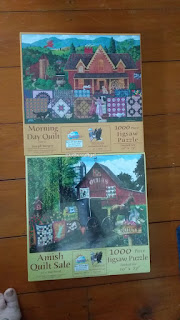 Pop over to visit Cheryll to find the links to who joined in last night & what projects they worked on.
Happy Stitching,
at May 09, 2020 12 comments:

Yesterday I joined in FNwF hosted by our lovely hostess Cheryll.


I started out early by finishing the top of Tail Feathers. 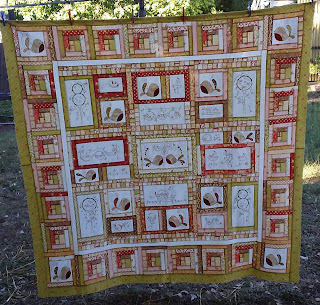 That done I was going to start another bonus project from the Christmas BOM & I said to myself "why don't you put the top together ?" "good idea me". In case you a wondering I quite often have conversation like this with myself. 🤣🤣. 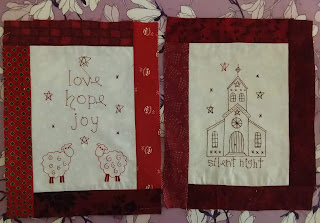 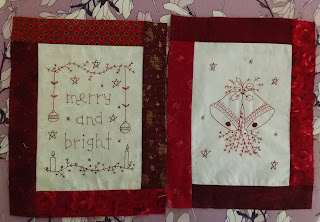 That done I went on to make the extra block Gail had provided so that the quilt had 25 blocks. 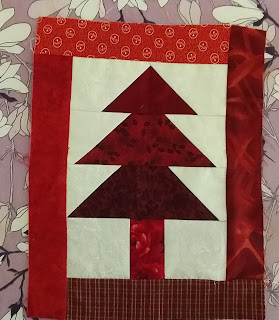 Hmm not to happy with it. This is the 2nd I made. The 1st I made I didn't read the instructions properly so I scrapped it & tried again. Followed instructions to a T & yet one of my points doesn't meet the border piece. I'll just have to live with it as I wasn't making a 3rd. It can be my "mistake".

So I proceed to get the top together & was thinking maybe I'd do the stitching border 1/4" inside borders like Gail did as for some reason I didn't do any of them when stitching the blocks or so I thought. Got the top together & as I was pressing it I noticed I'd done the first 3 blocks. Well darn. So now I'm puzzled as to why I never did the rest or remembered that I'd added the stitched border to month one's blocks. Now do I stitch the others or remove the stitching from the first 3 ?. 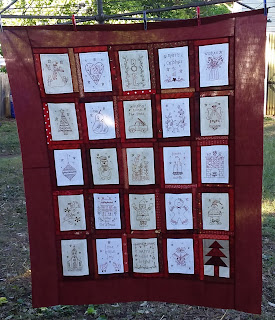 Then into my fabric cupboard to hunt around for a large red piece for borders & couldn't find a piece large enough so I was thinking I'll either have to wait & buy something or maybe piece the big borders like they are around the stitcheries when I had a💡moment. My Mum had given me a large rolled up piece of red fabric that I thought would be perfect. Yay now I can finish the top into a flimsy. So happy as everything from this top came from my cupboard.

Then last night I stitched a little on this block from Love & Hugs from Australia. 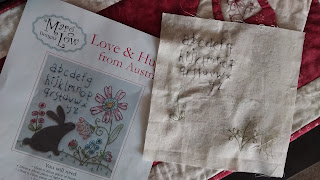 Pop over here to find out who joined in last night & what lovely projects they worked on.