I've been so tired all week that when i was going to do a blog post yesterday i just couldn't think what i'd done all week. I do know earlier in the week i read & slept quite a bit. I really hate these episodes of exhaustion but it's part & parcel of my health issues. So after much thinking i remembered i'd finished another stitchery in Ruth's Quilt & started another 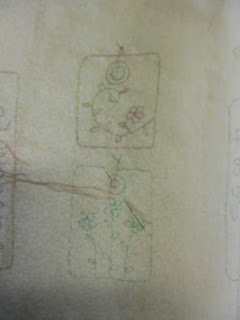 It's going to be a very no fuss stitchalong for me.

Next was my coffin quilt. I finished a row on the left side, decided to add a row on the right side because the lady i bought some prepared coffins of used paper rather than card to make them up & sadly it was affecting how the coffins were holding up. Now it sits better having the stronger cardstock. A top row was also added & ive started another row at the top. 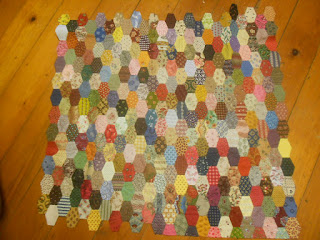 Now i've been sucked in to start another quilt. It's a sew along making a hexagon quilt based on a book by Leah Zeiber called Libby Morgan: Reunion. It is set in 1855 & everyone is using fabrics from the time & they are fussy cut. I really don't like fussy cut as it wastes too much fabric but i've been trying really hard to get over my aversion. :) 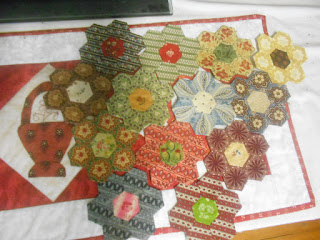 My first 13. Crap photo's today as it's raining & therefore very dark. I turned the light on but it didn't really help. :( 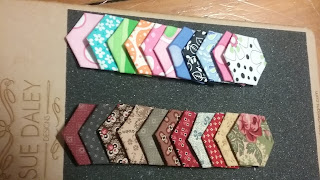 What a nice lot of paper piecing you've done! I like the look of fussy cut, but am also reluctant to waste fabric.

Hi Jeanette hope you are feeling better today,not good when you arent feeling good,you sure have done alot ,beautiful work there Jeanette xx

lovely projects. the body knows when it needs to rest.... I'm starting to play with your quilts this week....x
Hugz

Its hard to make yourself rest when there is so much sewing to do!

Fussy cutting always looks so good - but yep - it's wasteful.

Sorry to hear you are unwell Jeanette. Rest is best. Love all your projects.....I had a similar experience with paper vs light cardstock. Feel better soon xx

Jeanette all the stitching & blogging can wait - it's important to take care of yourself!
I'm with you on the fussy-cutting issue - while it does look great, I don't like the fabric waste either. Great work so far♥

Hope you are feeling better . I love the look of fussy cutting but agree it can be wasteful. Lots of nice work Jeanette.

Right there in the exhaustion boat with you, hon, that's why I haven't been blogging, get to the end of the day and ask "what happened???" Your stitching is really pretty, love the soft colors. Your coffin quilt is really growing! And I love the hexie flowers for the new quilt. I'm the same way with fussy cutting, love the look but hate the waste, lol!

You've been doing lovely work... and I also love how the quilts are growing! Rest when you need to... sometimes it's the best thing to do... xx

Beautiful creations, Jeanette. I love your beautiful hexagons. Take care, my friend, and get rest when you need it.

Lots of beautiful things happening there with you.