My week that was:

I started the week out tracing the blocks for Tis The season so i can get start but then the floods hit & i spent the next days watching the news. Whilst watching that i embroidered. I then discovered the Gumnut girls were asking for Sewing Kits to be made. Out came the patterns, tossed this one, then that one aside. I asked my daughter to choose. Wasn’t happy with what she chose even though the pattern was quite nice. Back to the drawing board.  I discovered a pattern i’d bought fabric for ages ago. That was my choice. Now to trace the embroidery. I had planned to have it in the mail by Friday but with all good intentions that plan went out the window. I then discovered that Friday that a friends house flooded.
I couldn’t get over there until Saturday & this is what her front yard looked like after removing her belongings on Friday 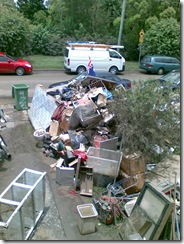 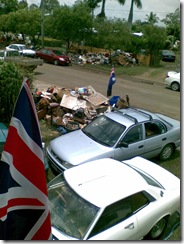 More belongings from the shed were added later. 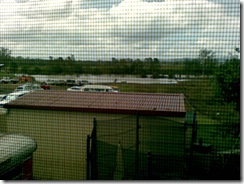 Not very clear but this is the view from the back window. The house is highset so i was looking down towards the river. Whilst we were there a helicopter was flying around & unbeknownst to us was taking photo’s. We found out Monday when a picture appeared in Mondays local paper. You can just see my son in the front yard. :) About 3 pm these guys turned up to help & they cleaned the shed out. They ran out of room to dump stuff on the footpath & you can see where they had to dump the stuff across the road. 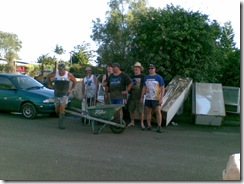 This is what i did Monday. Washed mud off my friend’s shop stock which she had stored under her house. I was lucky my 2 girls helped but it still took 3 hours. 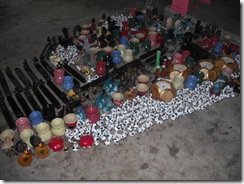 Meanwhile i still persevered with the embroidery & finally the day came when i could sit at the machine. Oh yes i decided i would make a 2nd Sewing Kit. 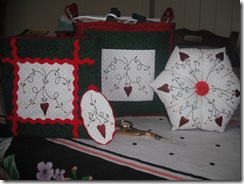 Never mind about the hexagons, there's always next week the important thing was you being able to help a friend in need! And you made 2 sewing kits, Wow!

I agree with Michelle , the hexies are not that important compared to helping your friend and making the beautiful sewing kits , mine look rather pitiful compared to them .

No worries about those hexies, Jeanette! It's much more important that you're supporting those who need extra help and love during these difficult times. What a wonderful friend you are!

My heart aches for those who have been hit with flood waters, and from such a great distance, all we can do is pray and offer money. I'm doing both with the certain knowledge that each person will come through this a different person - perhaps even better. Their lives may never be as they once were, but they must surely count every one of life's blessings, especially people who help them.

I'm sure you're counting your own blessings since your own home has stayed dry. Bless you for helping others.

I'm so glad that you could help you and your family could help your friend. My heart aches for her after seeing those photos. I'm sure she very much appreciated all your help!

Hi Jeanette, the kits you made are lovely and they will make a world of difference to whoever receives them. I am in the first stages of making softies or Huggles as my friend from Stitch Selection blog calls them. I hope to make some sewing kits when I can, I bought 3 pairs of embroidery scissors on Wednesday. :)

I love to get one of theses awesome kits.