I'd forgotten to take a photo of this when i finished it last week. 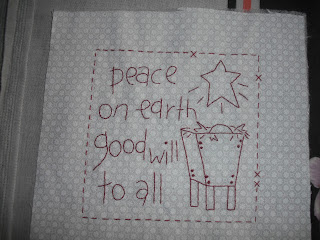 The first block from Tis The Season. Hasn't even been pressed or trimmed. I washed the pen out, dried it & put it away in the sewing folder i'm using for Tis The Season. 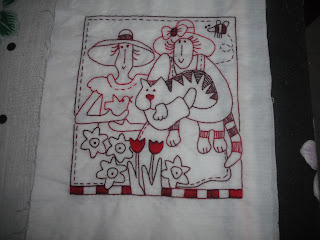 I finished another block of Catalicious. It's not pressed. I left it soak overnight to remove the pen but had a very rare problem of some of the green pen not coming out. Had to soak it in a little soapy water but i noticed it didn't all come out. :(. Soapy water usually works. Somehow when getting the next block out i grabbed block 4 from the folder. Doesn't matter though as long as i get them all stitched. :)

My thoughts are with the people of Far North Queensland as they prepare for Cyclone Yasi to hit.
at February 02, 2011

Love your stitcheries, especially the Catalicious! (Oh my, cyclone? Will keep them all in my thoughts too!)

Kitty stitchery is adorable! My thoughts are with them as well.

Oh, these are so cute!

Your stitchery is lovely and Brutus is looking fantastic!

Jeanette your stitching is just beautiful ... do love the BH stitchery :o).
Praying for everyone in North Qld ... this is so frightening for them!!
Hugs,
Joy xx

I love your stitcheries Jeanette , both so well done which is no surprise from the queen of embroidery ;-) My thoughts are also with those who could be affected by the cyclone , how dreadful , the snow storm we are about to experience is mild compared to that . hugs Sheila

You have finished so many wonderful projects and the stitchery blocks are lovely. Sometimes I wonder, what I do wrong ;-))) - I finish too few projects.
Hugs.

Look at that gorgeous stitchery! Where do you lovely people find the time?
My thoughts are with all of my lovely bloggy friends 'across the ditch' - what crazy weather we are having!